Re-publsihed from Business Insider Article on May 18, 2017

Tesla is far from the only company looking to profit off of rechargeable batteries for the home.

At-home batteries are a necessary purchase for anyone looking to convert their home to solar power. The batteries store the electricity generated by solar panels, which can then be used at night or during peak grid times to save money on your electricity bill.

But the batteries can also be used to charge electric vehicles, which is why many automakers are now selling their own units.

Scroll down to see the 10 at-home batteries looking to take on Tesla's Powerwall 2:

First, some information on Tesla's Powerwall 2 — a 264-pound, lithium-ion battery that you can mount on your wall. Panasonic makes the cells for the battery, while Tesla builds the battery module and pack. A single Powerwall unit stores 14 kWh of energy, but you can link up to 10 batteries side-by-side to increase storage. A single unit, including installation, can cost as much as $11,450.

Tesla has offered battery and solar installations as one process ever since it acquired SolarCity last November. Tesla is now selling solar roof shingles that are designed to look like an actual roof to compete with rival solar installers, like Sunrun and Vivint, on an aesthetic level. You can read more about Tesla's solar roof here.

1. LG Chem's RESU battery is probably Tesla's closest competitor in the space. Last October, LG Chem partnered with solar company Sunrun to bring its battery option to the US. You can read more about LG Chem's Sunrun partnership here.

The RESU is now available to Sunrun customers and its products distribution arm — a similar strategy to making the Powerwall available to SolarCity customers. It stores up to 9.8 kWh of energy and starts at around $4,000 for lower-voltage options. 2. Mercedes also has the potential to rival Tesla's home battery business. The company announced Thursday it will partner with Vivint to sell its home battery in California. The German automaker is following Tesla and LG Chem by partnering with a solar company to combine the battery and solar installation processes. Mercedes' battery stores 2.5 kWh of energy, but units can be combined to store 20 kWh. The biggest storage option costs $13,000, installation included. You can read more about Mercedes' partnership with Vivint here.

3. Nissan offers a rechargeable battery option, called XStorage, which holds 4.2 kWh of energy storage. The automaker began selling the XStorage in May in the United Kingdom, where Tesla and Mercedes also sell their battery options. Nissan's xStorage battery costs $4,500, which includes the price of installation. Nissan is looking to set itself apart as a sustainable battery provider by using old battery cells in the units. 4. BMW plans to sell two battery options that can store a whopping 22 kWh and 33 kWh worth of energy, but they have yet to launch. Like Nissan, BMW will take a sustainable approach by reusing batteries from its BMW i3 series. You can read more about BMW's at-home battery plans here.

5. Sonnen, a German company, sells several at-home battery options with up to 16 kWh of storage. The eco compact version pictured here holds 4 kWh of energy and costs $5,950. It comes with the inverter included. Sonnen does not sell the eco compact battery in the US.sonnenBatterie

The company derives two-thirds of its revenue from its German operations, but is looking to expand abroad. Sonnen opened a factory in Atlanta in April to begin production for the US market. It also has plans to expand to Australia, the United Kingdom, and Italy. The sonnenBatterie Eco, pictured here, is sold in the US and stores up to 16 kWh of energy. It starts at $9,950.sonnenBatterie

6. SimpliPhi Power is an at-home battery maker that's been around since 2002, but its original name was LibertyPak Company. SimpliPhi offers several battery options, the largest of which stores 3.4 kWh of energy. SimpliPhi's batteries can be combined to make a battery pack as large as you need. The company recently partnered with solar installer CivicSolar to provide a comprehensive energy system. 7. Sunverge offers battery systems providing anywhere from 7.7 kWh to 19.4 kWh of energy storage. Weighing around 500 pounds, the battery has to be installed by a trained Sunverge specialist. Sunverge comes with a corresponding app so you can monitor your solar energy storage and see electric grid costs at different times. A Sunverge unit can cost between $8,000 and $20,000, depending on the size you get. 8. Powervault is an at-home battery system that is sold in the UK. All units come with an inverter included, and the most powerful model stores 6 kWh of energy. Prices start at roughly $3,000. 9. Palo Alto-based ElectrIQ sells a battery for US homes that stores 10 kWh of energy. Its retail price is about $16,000 and includes the price of an inverter. 10. Panasonic, which makes the cells for Tesla's home battery, also has its own unit that can store 8 kWh of energy. It's currently available in Australia. Panasonic's battery weighs about 185 pounds, but the cost of a unit is not made readily available. 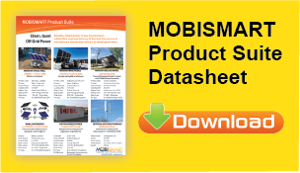 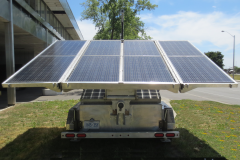 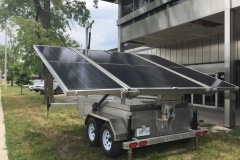 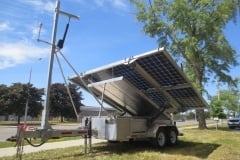 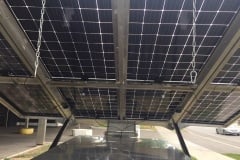 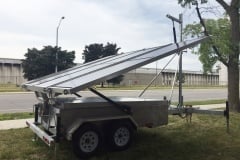 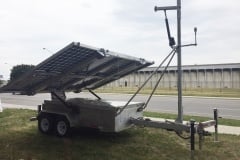 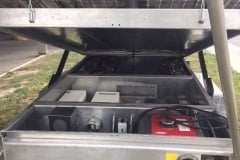 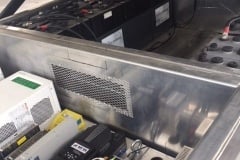 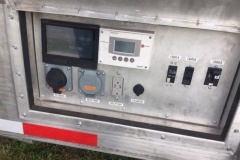 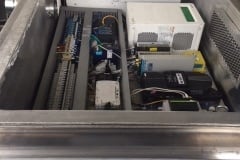