With continued global growth of electric vehicles (EV), a new opportunity for the power sector is emerging: stationary storage powered by used EV batteries, which could exceed 200 gigawatt-hours by 2030.

During the next few decades, the strong uptake of electric vehicles (EVs) will result in the availability of terawatt-hours of batteries that no longer meet required specifications for usage in an EV. To put this in perspective, nations like the United States use a few terawatts of electricity storage over a full year, so this is a lot of energy-storage potential. Finding applications for these still-useful batteries can create significant value and ultimately even help bring down the cost of storage to enable further renewable-power integration into our grids.

Potential to spark a second life

When an EV battery reaches the end of its useful first life, manufacturers have three options: they can dispose of it, recycle the valuable metals, or reuse it (Exhibit 1). Disposal most frequently occurs if packs are damaged or if they are in regions that lack necessary market structure. In most regions, regulation prevents mass disposal. Recycling can make sense if the battery electrodes contain highly valued metals such as cobalt and nickel, because there could be a sufficient gap between the procurement and recycling cost, especially given the predicted tight supply of nickel and potentially cobalt in the 2020s. While having an additional source of battery metals through recycling can be compelling to battery makers looking to secure supply, it will be critical to develop a recycling process that is sufficiently cost-competitive with mining for this path to gain scale; however, new processes that recover more material are not yet fully mature. 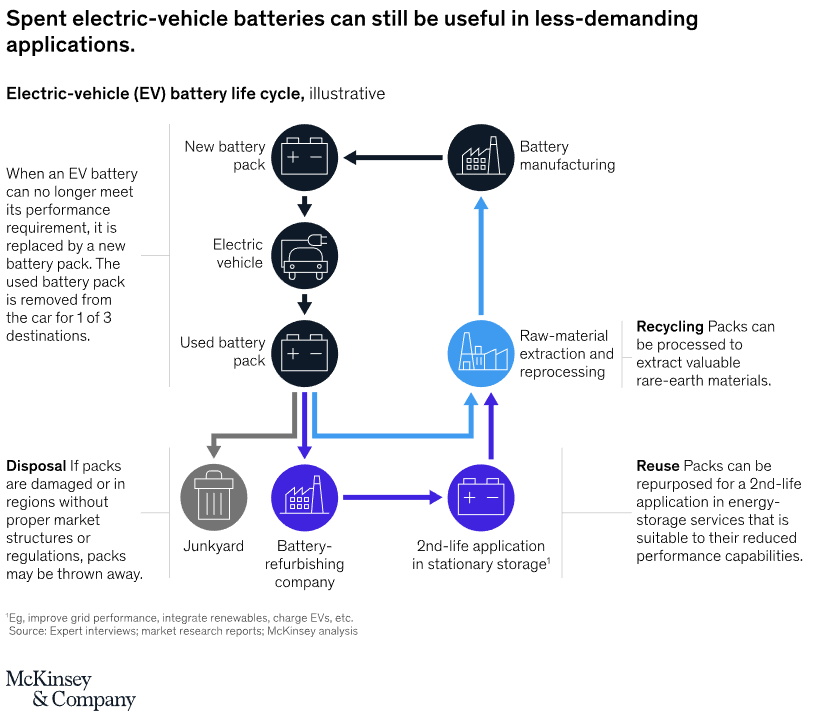 Reuse can provide the most value in markets where there is demand for batteries for stationary energy-storage applications that require less-frequent battery cycling (for example, 100 to 300 cycles per year). Based on cycling requirements, three applications are most suitable for second-life EV batteries: providing reserve energy capacity to maintain a utility’s power reliability at lower cost by displacing more expensive and less efficient assets (for instance, old combined-cycle gas turbines), deferring transmission and distribution investments, and taking advantage of power-arbitrage opportunities by storing renewable power for use during periods of scarcity, thus providing greater grid flexibility and firming to the grid. In 2025, second-life batteries may be 30 to 70 percent less expensive1 than new ones in these applications, tying up significantly less capital per cycle.

Due to the rapid rise of EVs in recent years and even faster expected growth over the next ten years in some scenarios, the second-life-battery supply for stationary applications could exceed 200 gigawatt-hours per year by 2030. This volume will exceed the demand for lithium-ion utility-scale storage for low- and high-cycle applications combined (Exhibit 2), which by 2030 will constitute a market with global value north of $30 billion. 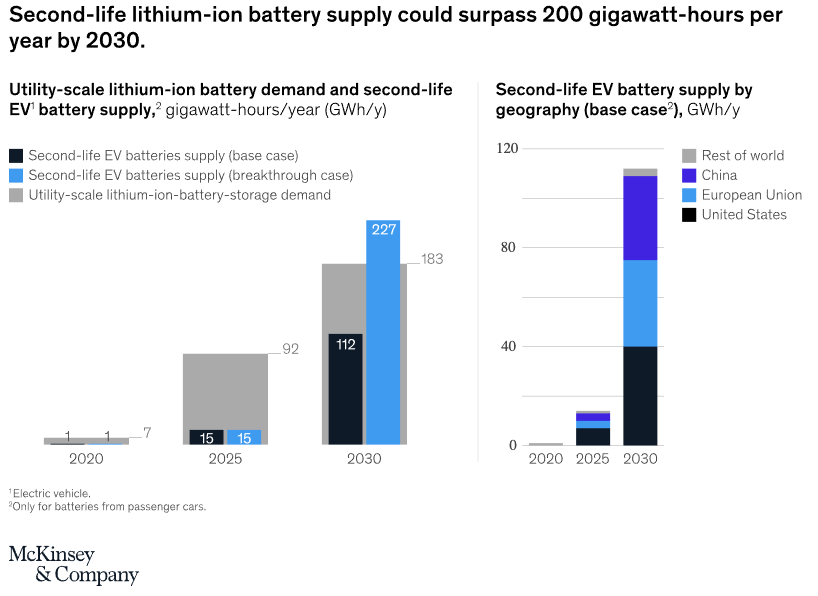 However, to unlock this new pool of battery supply, several challenges in repurposing EV batteries must be overcome.

The first is the large number of battery-pack designs on the market that vary in size, electrode chemistry, and format (cylindrical, prismatic, and pouch). Each battery is designed by the battery manufacturer and automotive OEM to be best suited to a given EV model, which increases refurbishing complexity due to lack of standardization and fragmentation of volume. Up to 250 new EV models will exist by 2025, featuring batteries from more than 15 manufacturers.

The second challenge involves falling costs for new batteries. As new batteries become cheaper, the cost differential between used and new diminishes, given that the rate of decline in remanufacturing cost is expected to lag the rate of decline in new manufacturing cost. We estimate that, at current learning rates, the 30 to 70 percent cost advantage that second-life batteries are likely to demonstrate in the mid-2020s could drop to around 25 percent by 2040. This cost gap needs to remain sufficiently large to warrant the performance limitations of second-life batteries relative to new alternatives.

The fourth challenge is the immature regulatory regime. Today, while most markets have some form of regulation requiring the recycling or remanufacturing of consumer electronics in general, most markets do not have EV-battery-specific requirements or delineations of responsibility between the producer and the consumer, save a few examples where goals have been set (such as in California and China). The lack of regulation creates uncertainties for OEMs, second-life-battery companies, and potential customers. The lack of regulation also gives rise to regional differences regarding whether recycling or reuse is the dominant pathway.

While these challenges are significant, they can be overcome by targeted action from the suppliers, end users, and regulators in the sector, enabling a sustainable second-life-battery industry to emerge. In fact, many of these targeted actions are already being taken by forward-looking players and industry associations.

To start, to handle the growing number of EV models and batteries, automakers can design their EVs with second-life applications in mind. For example, Nissan formalized a partnership with Sumitomo Corporation to reuse battery packs from the Nissan Leaf for stationary distributed and utility-scale storage systems. In September 2018, Renault announced its Advanced Battery Storage Program. This collaboration involves several partners in the energy sector and is expected to result in a 70 megawatt/60 megawatt-hours used EV battery installation in Europe by 2020, the largest in Europe to date.

To remain competitive in the face of falling costs for new lithium-ion batteries, companies can industrialize and scale remanufacturing processes to reduce costs and thus maintain the value gap between new and used batteries.

Regarding the lack of standards, a variety of global agencies and private-sector coalitions consisting of OEMs and second-life-battery companies are already working on industry-wide second-life-battery safety standards. These standards would essentially classify batteries based on their performance potential and classify storage applications based on their performance needs in order to create transparency into product supply and market demand. Given the dynamic nature of the EV-battery industry and the relentless focus on design, manufacturing, and performance breakthroughs, establishing a body to regularly review and refine battery standards and report annually on average cost and operating benchmarks could further catalyze growth in battery deployment.

Finally, in the absence of directive regulation outlining whether recycling or reuse is the path required to avoid mass disposal of batteries, the stakeholders involved—including battery OEMs, second-life companies, automotive OEMs, and utilities—have an opportunity to shape the ecosystem. Not only can they identity the value-maximizing path between recycling and reuse, they can develop new business models to fully capture the value at hand. Renault, for example, engages in both recycling and reuse programs with industry partners and a structured process in each pathway, rooted in regional context. By building relationships with end customers, whether those be utilities or commercial or industrial players, and by gaining insight into their capacity expansion plans, automotive OEMs such as Renault, and even battery OEMs, can intelligently select their end-of-life management pathway (that is, determining whether there is sufficient demand from applications suitable to remanufactured batteries or whether recycling would be preferable).

Battery-ownership models may evolve as well. Today, automotive OEMs and battery OEMs are comfortable relinquishing battery ownership to car owners. However, as second-life markets stabilize, owning the battery system will become more attractive due to the system’s confirmed residual value, which automakers and battery makers will not want to give away. Accordingly, we may see a rise in EV-battery leasing such that the automotive OEM or battery OEM can maintain ownership of the battery’s second revenue stream.

The shift of electric vehicles into mainstream use has already disrupted the automotive value chain in significant ways and is now on the verge of disrupting the energy-storage value chain as well. The need to dispose of millions of EV batteries in the future has already led to the emergence of new recycling and reuse industries, creating new value pools with new potential to harness and integrate renewable power into our grids. While these industries face the stark challenge of being on the cutting edge of market creation, corporations and their regulatory bodies have the power to take action to position themselves to capture the value that second-life batteries promise. They just need to look ahead. 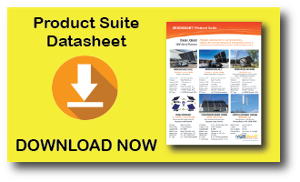